Plants 5-20 cm tall from a discoid holdfast, fleshy and firm with irregular branching, purplish, brownish to greenish red in colour (Image A). Apices of branchlets and main branches lacking distinct apical cells (Image B). Axes are terete in cross section throughout the thallus with a medulla of interwoven filaments surrounded by an inner cortex of large isodiametric cells with thick walls that gradually grade toward the outer cortex (Image C). Tetrasporangia are zonate, 18-26 by 45-55 µm, and scattered in the cortex (Image D).

This species is narrowly distributed in the NW Atlantic flora with genetically confirmed records confined to south of Cape Cod, MA. This species grows attached to rock or other hard substrata in the shallow subtidal (1-8 m). Although not closely related, this species can be confused with Dumontia contorta (Gmelin) Ruprecht, Devaleraea ramentacea (Linnaeus) Guiry and Gracilaria tikvahiae McLachlan to the inexperienced collector, but differs from these three species in having a filamentous medulla (Image C). It also bears a superficial resemblance to the more closely related Cystoclonium purpureum (Hudson) Batters, but that species has a distinct apical cell at the branch tips, has a medulla composed largely of longitudinally oriented filaments, and produces basal stolons. Furthermore, Agardhiella subulata has a limited range in the NW Atlantic flora while Cystoclonium purpureum (Hudson) Batters is more broadly distributed. 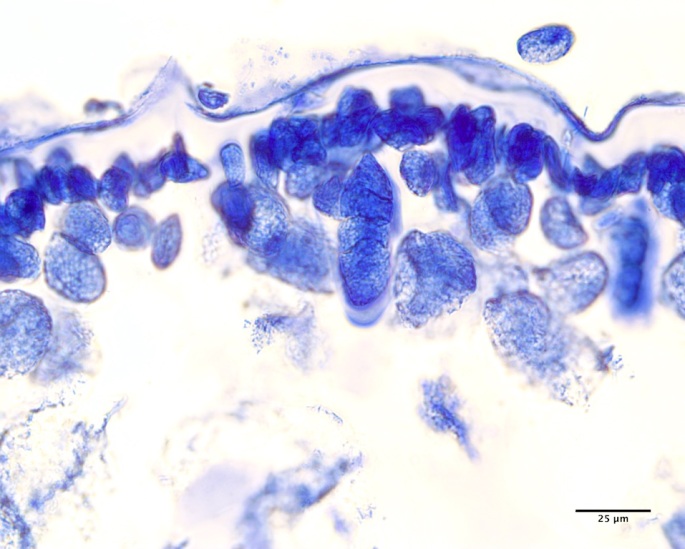 Image D. Tetrasporangia have a zonate pattern and are scattered in the cortex (GWS017856).