Blades with a rubbery texture, typically olive-green near the base transitioning to reddish brown at the margins (Image A). Blades can be broader than tall to round in outline (Image A), but also broadly lanceolate in some collections (Image B), with the holdfast roughly central on the base of the thallus (Images A & B). In surface view vegetative cells are rounded to angular in outline, 9-28 µm, and densely packed with cellular contents (Image C). Margins can have irregular unicellular to multicellular outgrowths (Image  D). Toward the thallus base vegetative cells produce descending rhizoids that contribute to the holdfast (Image E). In transverse section of vegetative regions the thalli are monostromatic, 40-80 µm thick, with each cell containing a single pyrenoid (Image F). In this section a cell is initiating a central transverse division (two pyrenoids in the cell) to transition to a reproductive state, whereas another has clearly undergone the transverse division for neutral spore development (our populations are reportedly asexual) (Image G). In surface view of reproductive regions the developing neutral spores are arranged in pairs or groups of 3-4, irregular to angular in outline, 9-20 µm, and with an obvious central pyrenoid (Image H). In section the neutral sporangia have irregular division patterns (Image I).

A common upper to low intertidal Porphyra in the NW Atlantic (rarely subtidal), on rock and other hard substrata (e.g. barnacles) or as an epiphyte on other algae. Individuals from sheltered areas and or lower in the intertidal similar in morphology to Porphyra purpurea (Roth) C.Agardh,  but the blades are typically more ruffled and rubbery, thicker (> 80 µm), more olive-green in colour, and lack vertical segregation (zipper) of the reproductive structures. Reproductive year-round; an aseasonal annual. We have genetically verified records from RI to the NL (island), as well as from the NE Atlantic.

Despite differences in ITS and rbcL, Porphyra umbilicalis shares COI-5P sequence in common with its close relative Porphyra linearis Greville consistent with relatively recent introgression between these two species (Image J). Interestingly, on exposed rocks in the southern Bay of Fundy at least, Porphyra umbilicalis forms an upper intertidal band in late winter (see the featured image above) mirroring the seasonality and habitat of Porphyra linearis Greville along the exposed coasts of Nova Scotia. Molecular ecological research is warranted in our NW Atlantic flora (using the ITS or rbcL as a marker) to better understand the relative habitat and seasonality of these two species at exposed to semi-exposed locations.

Note that there are a number of monostromatic foliose bangiophyte species in the Canadian flora (for the NW Atlantic see Mathieson & Dawes 2017), which can be difficult to identify especially in the absence of reproduction. Definitive identification requires molecular data. 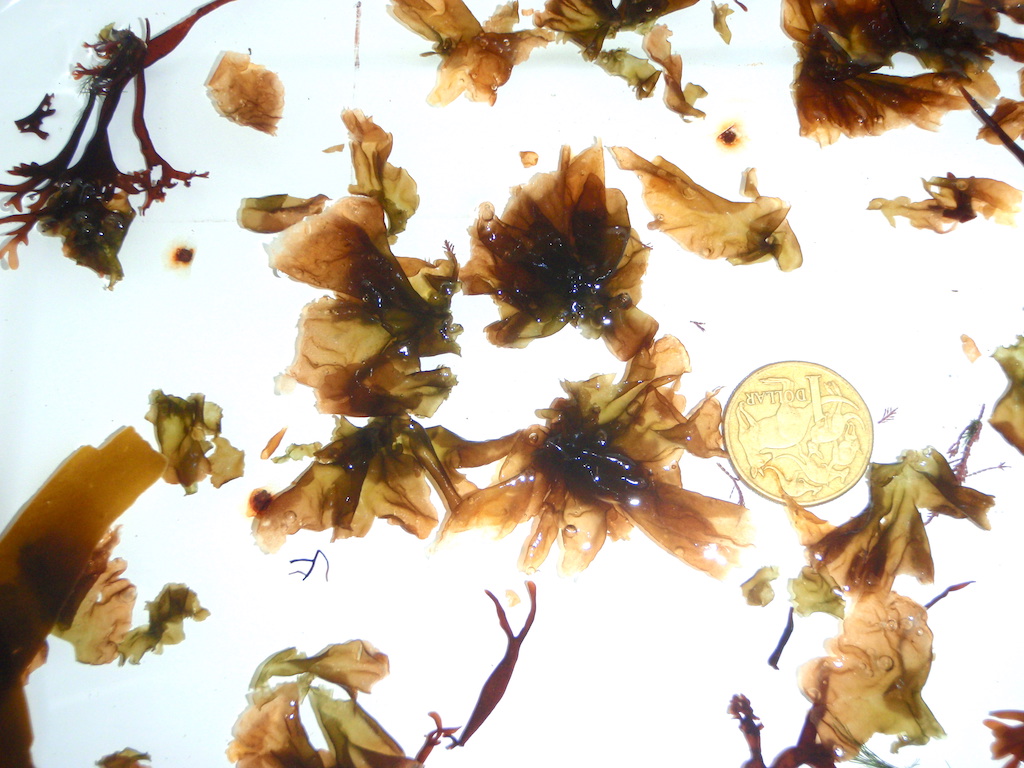 Image A.  Distinctive morphology of this species collected during March in the spray zone of an exposed location (Tiner Point, Bay of Fundy, NB; GWS044245).

Image B.  Lanceolate morphology of this species collected from the mid intertidal at a sheltered location (Wallace Cove Lighthouse, NB; GWS031523).

Image E. Surface view of a basal vegetative region of the thallus showing the production of descending rhizoids to form the holdfast (GWS044245).

Image F. Section of a vegetative region of the thallus (GWS044424).

Image H. Surface view of a marginal reproductive region of the thallus (GWS044424).

Image I. Section of reproductive portion of blade (GWS044424).

Image J. Comparative data for the markers COI-5P (see text), ITS and rbcL for P. umbilicalis and Porphyra linearis Greville. Corresponding text and table from a short note that was mothballed (politely rejected by J. Phycol.) are available as pdf files: Saunders 2019; Table S1; as well as a pdf of this figure, Figure 1).