Not having collected this species myself in the NW Atlantic, details are few and based on a single decades-old specimen that was rehydrated for observation. This species is reportedly 2-15 cm high, irregularly to dichotomously branched and soft and gelatinous (Image A). Erect portions arise from a soft crustose base, and the life history is reportedly isomorphic. In squash mount the thallus has a clearly filamentous medulla the cells of which become inflated (60-90 µm long by 30-40 µm tall) toward the thallus surface (Image B) and bear an inner cortex of 1-2 layers and an outer cortex of 2 layers (Image C).

This species could possibly be confused with Nemalion multifidum (Lyngbye) Chauvin, but axes in the latter are more typically terete and the cortex consists of clearly dichotomously branched cortical filaments that tend to separate in a squash mount.

We have no genetically verified records of this species for the NW Atlantic. Having never collected it myself, our holdings at UNB are restricted to a single specimen from a collecting event by my predecessor at UNB, Dr. A.R.A. Taylor. The collection was taken from a low intertidal pool at Letete, NB. on May 30, 1958. This is one of our more frequently visited local collecting locations and over 24 years I have not encountered it. Tsengia bairdii is considered a rare subtidal species south of Cape Cod, but also from coastal NS and NL (Sears 2002). I would appreciate specimens in silica to complete molecular studies – good luck with that:-) Furthermore, if this species has an alternation of heteromorphic generations, then it is likely incorrectly assigned to this genus, family and order 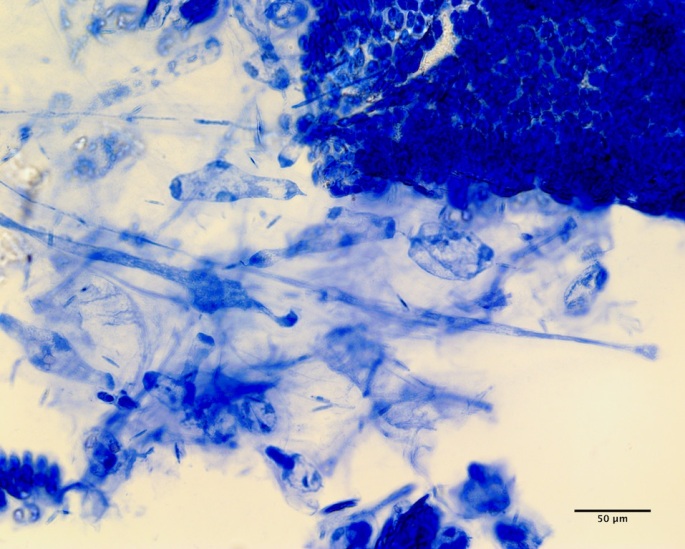 Image B. Squash mount displaying medullary filaments typical of the central medulla and others with inflated cells that bear the thin cortex (A645). 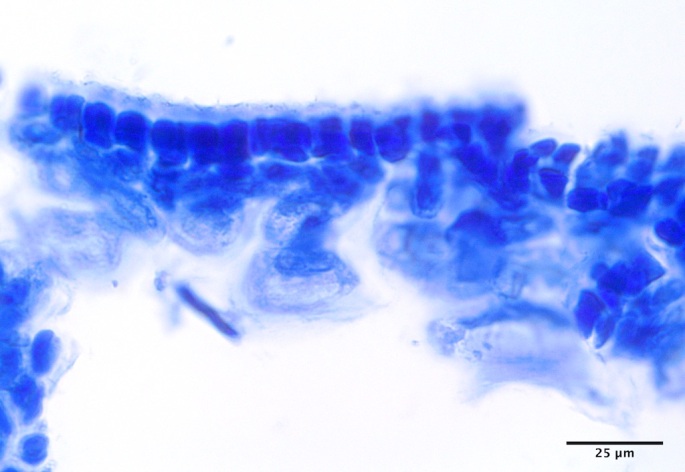